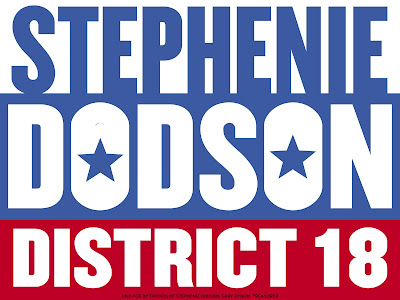 Stephenie Dodson wants David Glasgow, John Ray Clemmons and the voters that supported them last Thursday to know that their priorities are also among hers. From a message she sent out today:

To the good folks of District 18,

Here’s an old adage you’ve probably heard – since we each have two ears and one mouth, we should listen twice as much as we talk. I’ve been listening to voters throughout the district during this campaign. I’ve also been listening to the other candidates.

It’s vital as a leader to know that’s it’s not just your ideas that are the only good ideas. When I read the thank you message David Glasgow sent to his supporters on Sunday, I was once again reminded of just how passionate and insightful David is about District 18 and Nashville.

He said in that letter he planned to ask me if I supported the measures he and his supporters have been concerned about. The answer to David is a resounding, “Yes!”

David and I agree these actions are among those that should be taken (and I’m basically quoting from David’s message for the following to show we’re in complete agreement on these matters):

-- Make our streets safer for walkers and bikers by adding crosswalks, at least at 21st and Bernard, Blair at Harris Teeter's back entrance, and two more along the south end of Belmont Blvd. The new crosswalk on Blakemore must also be made safer.

-- Clean up Love Circle for good by breaking through the bureaucratic impasse that keeps the area in limbo. Work with the neighbors to solve the new traffic and parking issues created by new development.

-- Improve traffic safety at Chesterfield/Fairfax by adding a traffic mirror added at the bend in the alley between there and the Continental.

-- Add parking along Magnolia. Institute 2 hour parking between 9am-4pm and longer parking available between 6pm-6am in the outer lanes. This would help merchants in the Village, provide places for more people to start their jog or walk and help visitors and Belmont students avoid residential streets.

-- Adopt the green space on the Brightwood overpass as a demonstration project. This requires gaining the necessary permissions from metro, state and federal agencies, inviting Civic Design Center staff to develop ideas for using this neglected space up to its full potential, and bringing together neighbors from the bordering neighborhoods to raise the funds and donate the time needed to put the plan into action. This could be used as an example of what can be done with other green spaces around our neighborhood and the city - including Love Circle.

-- Social issues. Our representative should take the lead on social issues that hurt Nashville's reputation and ability to attract new businesses and commerce. English Only was a huge waste of taxpayer dollars and time. Discrimination should not be tolerated in any guise.

-- Work with Metro Transit Authority to develop a pilot project to take people from residential neighborhoods to commercial districts from 6pm-2am on Thursday through Saturday nights.

John Ray Clemmons said the following when The Tennessean asked him for the top three things he’d want to do in District 18:

“We must support and strengthen our public schools. I also believe we should focus on parking and traffic issues that plague certain parts of our district. Permit parking is a solution that may not work everywhere, but if a residential street or neighborhood wants to enjoy their fundamental right to park in front of their own home, I will champion it. Also, there are improvements that can be made to make the district friendlier to bikers and pedestrians.”

I concur with those statements as well.

I salute the commitment to and the ideas for our district voiced by David, John and many others throughout our vibrant and diverse neighborhoods. Their causes are mine, theirs, yours and ours. What an exciting future we’ll have in District 18 and Nashville as we work to make these ideas realities!

Stephenie Dodson
Working For You
www.stepheniedodson.com
Posted by Evans Donnell at 12:15 PM