A Broadway Celebration: In Performance at the White House 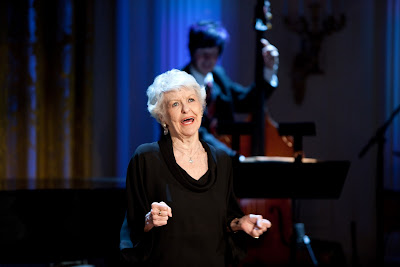 Elaine Stritch performs during “A Broadway Celebration: In Performance at the White House” in the East Room of the White House, July 19, 2010.
Official White House Photo by Lawrence Jackson

PBS airs the latest installment of the In Performance at the White House series Wednesday night (8 PM Central on Nashville's WNPT station: Channel 8 on Comcast Cable). It's called "A Broadway Celebration" and indeed it is.

I've loved these shows since Washington's WETA started producing them during the Carter Administration; they combine the grandeur of The People's House with the greatness of some of our best performing artists. Recent broadcasts spotlighting the work of Stevie Wonder and a celebration of Civil Rights era music that brought Bob Dylan to the East Room have been among my favorites. After watching an advance copy of this episode, I think "A Broadway Celebration" is one of the best shows this acclaimed series has ever produced.

Why? Well, having the legendary Elaine Stritch declare "I'm Still Here" from Stephen Sondheim's Follies is enough to make this a must-see. But, as TV commercials often say, there's more, much more: Idina Menzel not only doing her signature Wicked tune "Defying Gravity" but heart-rendingly singing "What I Did For Love" accompanied by A Chorus Line composer Marvin Hamlisch on piano is pretty awesome too.

As if those selections weren't enough, the always-great Audra McDonald offers her range of remarkable talents with the funny "Can't Stop Talking About Him" number by Frank Loesser -- it's possibly the best rendition since Betty Hutton did it in the 1950 film "Let's Dance" -- and the love-seared "Happiness is a Thing Called Joe" from Cabin in the Sky. Ethel Waters would be proud.

Nathan Lane hosts with plenty of trademark one-liners and a delightful return to his Tony Award-winning role as Pseudolus in A Funny Thing Happened on the Way to the Forum via "Free" with Brian d'Arcy James (a Drama Desk winner for his role in "Shrek the Musical"). And there are other highlights in this hour-long show directed by George C. Wolfe which you'll see when you tune in, including boffo appearances by 12-year-old performing sensation Assata Alston and Tony winner Karen Olivo ("West Side Story"). How appropriate that Wolfe helmed this project -- a national treasure directing a show at a national treasure.

What was it like for these Broadway actors to perform at The White House? Watch:

Posted by Evans Donnell at 3:18 PM No comments: