A Love Letter To Theater and Broadway I met Leonard Jacobs when we were both critic-fellows at the 2004 National Critics Institute at the Eugene O'Neill Theater Center. Jacobs is the national theater editor of Back Stage and has a professional background in theater and journalism that makes for an impressive list of accomplishments.

I went on to write some articles for him as a regional correspondent. He's also one of the nicest guys I've ever met and I feel quite privileged to call him my friend.

With that back-story in mind readers would probably expect me to like Jacobs' new book, which has just been issued by Nashville's Turner Publishing Company. His coffee-table-sized tome is plainly and unpretentiously called Historic Photos of Broadway: New York Theater, 1850-1970.

Yes, I know as a critic I should be careful about issuing raves. In this case, though, I have no qualms about a "love letter" when Jacobs has so beautifully orchestrated one of his own to theater in general and Broadway in particular.

The pictures and text in this book reveal the Great White Way's rich history like never before while reminding us of why we love the living world of theater today. It deserves the classic "money quote": Historic Photos of Broadway is a can't-miss five-star hit!

Why? It's true that theater brings spoken words and living images to us in a way no book can. But an unbalanced chronicle of Broadway that has too many words or too many pictures keeps us from a sense of what shows we never saw were like and how shows we saw should be remembered. This volume happily avoids those extremes.

Jacobs uses thorough research, a deft writing style and selections from the extraordinary photo collection of the New York Public Library for the Performing Arts' Billy Rose Theatre Division to tell us how Broadway came to be the Broadway we know today. His compilation manages to educate and entertain at the same time. 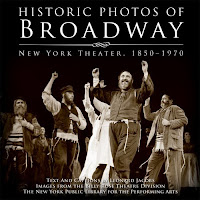 Yes, there are pictures one might expect from such a book, such as the dust jacket cover photo of Zero Mostel in his legendary role of Tevye in Fiddler on the Roof. That's no complaint, though, since it would be curious if such a shot were left out. But there are also pictures that are unexpected, like one with a wide-mouthed Robert Goulet who looks like he's singing during a costume check for his Broadway debut as Lancelot in Lerner and Lowe's Camelot.

Going further back there are pictures of long-forgotten stars and long-since-demolished theaters that reveal a theater world many of us sadly know little if anything about. One of my favorites is an 1894 photograph of 19th century star Richard Mansfield slumped somewhat forlornly in a chair as Captain Bluntschli in Shaw's Arms and the Man. Although we cannot hear him speak or see him move, the image gives us a glimpse into character and moment that's quite enthralling.

Mansfield doing Shaw not your cup of tea? No worries. With 240 images spanning 120 years Historic Photos of Broadway has more than enough visual options to please just about any reader.

Jacobs gives us names, dates and statistics that we require from such a chronicle. What makes his writing really matter, though, is the enthusiasm for theater he conveys throughout his section texts and captions. And he makes a sensible request in his preface about the black-and-white photographs contained in his labor of love:

"These images ask us not to judge and not to linger. They simply ask us to pay a visit, tip our hats in respect, and take the full measure of our present moment in the theater by sneaking a quick peek through that metaphorical window to the past. These images permit us to shut our eyes yet one more time and try to picture that past. They also let us celebrate our present and they ultimately demand that we press on, to welcome the future with fully open arms."

It's that positive, progressive spirit that makes this book such a joy for me. Historic Photos of Broadway is not merely a record of Broadway or theater's past. It's an inspiration for theater's present and a beacon for its future.

Bravo, Leonard! Vive Le Théâtre!
Posted by Evans Donnell at 11:46 AM No comments:

Quite some time ago I reviewed the wonderful, wild and whiplashingly funny THE DOYLE AND DEBBIE SHOW for The Tennessean while it was playing at Bongo After Hours Theatre ("The Doyle and Debbie Show is a brilliant musical revue that should be seen more than once" was part of my written rave).

Well, after appearances on Late Night with Conan O'Brien and elsewhere, they're back for a gig at The Station Inn. Bruce Arntson, Jenny Littleton and Matthew Carlton comprise the cast. What a talented trio they make! If you haven't seen them, go. If you can't make it, watch this video and others the group has posted here.

Posted by Evans Donnell at 3:28 PM No comments:

Posted by Evans Donnell at 11:58 PM No comments: