Some Words From Alaska

My friend Robin Berrington sent me a link that's worth clicking. Read one Alaskan's take on Sarah Palin here.
Posted by Evans Donnell at 5:34 PM No comments:

Posted by Evans Donnell at 9:25 AM No comments:

Most Watched Convention Speech Ever...

...and more US viewers than those tuning in for the Beijing Olympics opening ceremonies. Click here for the preliminary numbers from Nielsen courtesy of the Hollywood Reporter.
Posted by Evans Donnell at 3:02 PM No comments:

So John McCain thinks Alaska Gov. Sarah Palin will help him win in November. I wish Republicans the same luck Democrats had when they nominated Geraldine Ferraro in 1984. The fact that it took the not-so Grand Old Party 24 more years to do the same thing is no surprise since they're behind the times in everything else.
Posted by Evans Donnell at 1:29 PM No comments:

Officially on the Ballot

Barack Obama and Joe Biden sign the papers that officially put them on the Nov. 4 ballot as Democratic Party nominees for President and Vice President following Barack's acceptance speech in Denver.

Posted by Evans Donnell at 4:39 AM No comments:

Posted by Evans Donnell at 1:42 AM No comments:

A Balanced and Inspirational Effort

Barack Obama said things in his acceptance speech Thursday that were expected and unexpected. He reminded us of the vision that we've come to admire and of the tough Chicago street organizer many have possibly forgotten or never knew he was. Part offense, part defense, plenty of lofty phrases but also plenty of plain talk about specific policies.

He understood the American people need to hear all of it, whether he was speaking about cutting middle-class income taxes while closing large corporate tax loopholes, ending our disastrous and unnecessary involvement in Iraq or taking the title of a 1970's TV drama and creating a rallying cry from it for all who've had enough of the Bush-Cheney policy disasters that John McCain proposes to continue. Indeed, Senator, "Eight is Enough," whether you're trying to pay your mortgage, buy food for your family or gas and oil to keep your car going so you can make it to work each day.

He played to his strong suits but also addressed what his detractors have called his weak points. This is a man who can win November 4. He needs as he did Thursday to keep playing at his own tempo and not McCain's, but I think he's smart enough, and yes, experienced enough to do just that.
Posted by Evans Donnell at 1:10 AM No comments:


Posted by Evans Donnell at 1:16 AM No comments:

Sharon Gentry Joins the School Board 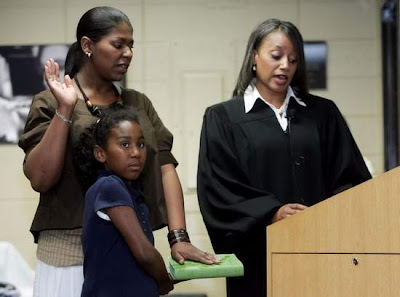 Sharon Gentry is sworn in as the District 1 representative of the Metro Nashville Public Schools Board of Education Tuesday by Davidson County General Sessions Court Judge Angelita Blackshear Dalton. Gentry's daughter Taylor, 8, holds the Bible. (Photo courtesy of The Tennessean/Sanford Myers)
Posted by Evans Donnell at 9:01 PM No comments:

Nominating Words to Remember and Inspire

“With eyes firmly fixed on the future in the spirit of unity, with the goal of victory, with faith in our party and country, let’s declare together in one voice, right here and right now, that Barack Obama is our candidate and he will be our president.”
- Sen. Hillary Rodham Clinton (D-NY)

Posted by Evans Donnell at 7:23 PM No comments:

Posted by Evans Donnell at 11:28 PM No comments:

Posted by Evans Donnell at 9:50 AM No comments:

Posted by Evans Donnell at 2:16 PM No comments:

Posted by Evans Donnell at 9:27 AM No comments:

Well, the Barack Obama campaign milked the "send us your email or cell phone and we'll tell you first" gambit too long. Someone inevitably and unsurprisingly talked and Delaware Sen. Joe Biden is the Veep pick for Democrats.

A question for the folks at Obama Central assuming this story (unconfirmed as I write this post) is accurate: Did you guys really think you could keep people in your and Biden's camps from telling a reporter until Saturday morning? If you had really been serious about letting your supporters (me included) know first you wouldn't have vainly tried to sit on this story overnight.

Either this was a cynical ploy to attract more support or you're incredibly naive about the ability of the press to get information. Neither possibility bodes well from a public relations standpoint as the campaign heads into the Fall.

UPDATE: I got my text at 2:43 AM. I think it's safe to say that wasn't the initial plan unless the night owl crowd is Obama's big constituency.

UPDATE II: Here's an article on this "odd VP rollout" from Politics Magazine.
Posted by Evans Donnell at 1:17 AM 1 comment:

"Out of Touch McCain" Ad

Posted by Evans Donnell at 6:45 PM No comments:

I was one of the 2006 fellows for the NEA Arts Journalism Institute in Theater and Musical Theater at USC Annenberg School for Communication in Los Angeles. The program is directed by the wonderful, wise and warm Sasha Anawalt.

I was with 24 other theater journalists from around the country and thoroughly enjoyed interacting with them. The multitude of memorable offerings Sasha arranged for us included getting to meet and learn from Robert Brustein, a living legend among theater practitioners and chroniclers.

Any regrets? No. I'd unreservedly and enthusiastically recommend the experience to any colleague because it's personally and professionally enriching. But I will admit when I heard that John Lahr was coming the next year I wanted to jump on a plane and crash his sessions (hey, alumni privileges, right?).

Well, Sasha in her infinite wisdom knew her beloved fellows past, present and future would want to see and hear the remarkable, multi-award-winning critic/author/playwright. At the institute's web site there's a terrific video of Mr. Lahr's appearance in 2007. Click here to open the player of your choice and get inspired!
Posted by Evans Donnell at 1:40 AM No comments: 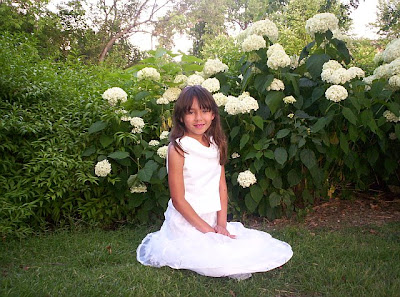 It's time for her "Nine on the Ninth Celebration"! Nine years ago today our daughter - who also goes by her lovely middle name Galina - was born in the village of Ola near the Siberian city of Magadan. Her mommy and daddy are very happy to be the parents of this beautiful and bright blessing who truly came to us from Russia with love!
Posted by Evans Donnell at 10:46 AM No comments:

Larry Woods interviewed Belmont President Bob Fisher on Thursday's The Steve Gill Show about the upcoming presidential debate. Listen to their radio conversation here.
Posted by Evans Donnell at 10:14 AM No comments:

I'm so happy the folks in District 1 could care less about all the blogosphere silliness concerning Chamber of Commerce machinations and running for public office as a new mother. They wanted an intelligent and well-qualified person - who has business savvy and a doctorate of education - to represent them on the Metro Nashville Public Schools Board of Education.

Sharon Gentry will make a terrific addition to that board. Yes, I'm biased given my association with the Gentry family, but it still doesn't change the fact that she was the best qualified candidate in District 1. The voters there obviously agreed.

I'm also glad that Alan Coverstone has won in District 9. We need more people like Sharon and Alan overseeing our system. I know the state is taking more and more control because of the federal "No Child Left Behind" statute but for now our local voice is in better hands than it was before this election.
Posted by Evans Donnell at 8:06 PM No comments:

The following was part of an email last night from District 18 Metro Councilman Keith Durbin:

The presidential debate to be held at Belmont University is fast approaching. On Tuesday, October 7 the eyes of the world will be on Nashville. Many in the neighborhood have had questions as to how the debate will affect them. Earlier this spring a community meeting allowed neighbors to ask questions and Belmont staff to provide the answers they had at that time.

On Thursday, August 14 at 6:30 pm, we'll hold a second meeting to present the current event plans and allow the community to ask questions. The meeting will be held in the Curb Event Center Beaman Rooms A&B. All community members are invited.

Belmont has a site set up to provide information about the debate for the community: www.belmontdebate08.com."

It was announced Tuesday that former NBC anchor Tom Brokaw will moderate the town hall-style forum.
Posted by Evans Donnell at 2:23 AM No comments:

A gift to all of us from Mike Eldred

Mike Eldred has a voice that I'm sure is otherwise reserved for the angels. He may also be the kindest soul other than my wife that I've encountered in my adult life (my grandfather was the kindest soul I'd had the privilege of meeting before then).

He's just posted a video that is well worth seeing. I can't decide what's more beautiful - the breathtaking Montana landscapes or Mike's glorious singing. I figure in the end they're both so wonderful and fulfilling that they make a perfect match.

Watch the video here.
Posted by Evans Donnell at 12:55 PM No comments:

Posted by Evans Donnell at 4:50 PM No comments: