A "People Book" from a "People Person"

On Thursday my wife Ann and I will celebrate 14 years of marriage. We're very happy and with the recent addition of our daughter Katie it's hard for us to imagine a better relationship or a stronger family.

That wasn't always the case, though. By January 2005 we had a marriage where conflict was regularly damaging our relationship. We still cared about each other, but we weren't connected in a healthy or sustainable way. We were headed for divorce. 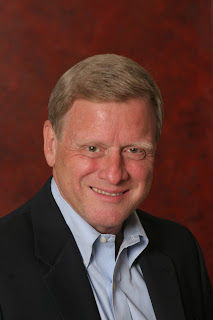 That's when we got a recommendation to see Dr. Alan Godwin (pictured on right). We called him and arranged an appointment.

Neither one of us knew what to expect. Would this help save our marriage? And what was this Dr. Godwin like?

A clue to the man and his methods came as he opened the door to show us into his office that first day. He greeted us with one of the warmest smiles and firmest (yet gentlest) handshakes I've ever encountered. His eyes were bright and his pleasant Southern accent was inviting.

"Hello. Call me Alan," he said as I started to greet him with his professional title and last name.

Alan made us feel better about what we were doing during the first moments of meeting him.

There were many sessions after that first appointment. They were sometimes hard and often painful. It wasn't easy to jettison bad behavioral habits and develop what Alan called a "new process" to deal with conflicts so our marriage could survive and thrive. But Alan, patient and caring, worked with us together and separately over many months as we created that new process and placed our marriage and individual lives into healthier, more flexible frameworks.

During those sessions it became obvious to me that Alan Godwin is more than a licensed psychologist who counsels couples as part of his professional practice. He's a "people person" whose strong empathy for others makes him well-suited to his vocation. 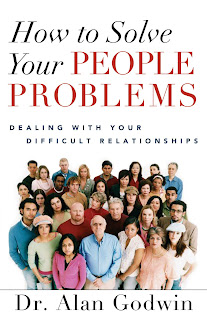 Now that "people person" has written a "people book" that's well worth reading, whether your relationship troubles concern your spouse, another family member, friend, colleague or acquaintance. How to Solve Your People Problems: Dealing with Your Difficult Relationships is a thoughtful, easy-to-read guide to handling the inevitable conflicts that come through human interaction.

I've been an actor and journalist. I know you have to be aware of your audience to be a successful communicator. Alan knows his audience too - he doesn't descend into a pedantic written lecture on the never-ending quest to understand the human brain or give us a mind-numbing history lesson on the development of modern psychoanalytic techniques. His writing style is like the man himself - down-to-earth, friendly, often funny and always insightful.

His book starts with an introduction called Good Conflict Camp that notes our often childish behavior when conflicts arise and truths about those conflicts. Two of those truths stand out to me as being necessary to embrace in order to become better at dealing with conflict: that we naturally handle conflict poorly and that conflict with reasonable and unreasonable people must be handled differently. Those may seem obvious when they appear in a book but I know I've failed to heed both truisms on several occasions.

The book is then broken up into three sections: People and Problems, Reasoning with the Reasonable and Dealing with the Unreasonable. Alan leads us through a myriad of man-made relationship minefields with examples taken from his personal and professional experiences, references to Biblical text, relevant quotations and common-sense observations. There are summations called In a Nutshell and For Reflection questions that help us focus our thoughts as we finish portions of the book.

A portion that resonates strongly with me occurs near the end of the Reasoning with the Reasonable section. It's a list of questions I now try to ask when I'm in conflict with someone else. The list is called the 5 Crucial Questions for Good Conflict:

Which problem will we fix?
Why do we feel so strongly?
How can we agree to fix this?
What will we do to implement it?
When will we evaluate it?

Alan notes that awareness, empathy, humility, reliability and responsibility are the "muscles" needed for the actions that satisfactorily answer these questions. Notice that the word "right" isn't listed. As I've heard Alan say before, "Do you want to be 'right' or do you want to have a relationship?"

That last question leads me to Alan's final section about dealing with unreasonable people. We all have someone in our lives that fits the unreasonable tag: the "toxic" parent, the controlling spouse, the manipulative acquaintance or the difficult-to-deal-with colleague. Alan lays out strategies to set boundaries in our relationships with such people and avoid the "dramas" they try to entice us into playing with them.

The balance between age-old truisms, modern situations and flexible solutions makes How to Solve Your People Problems a practical guide for overcoming corrosive conflict. What marks this volume out from similar books, though, is that it's not just a mental health professional talking to us through these pages. Alan's humane and inclusive prose makes us feel a friend is helping us relate to other people in an enriching and nurturing new way. I know Ann and I are glad he's been our friend since that day in 2005. Now through this book he can be yours too.

(Click here to go to Alan Godwin's web site. For more about the book or to see purchase options click here to visit Harvest House Publishers.)
Posted by Evans Donnell at 2:16 AM

This is truly an insightly commentary regarding the book, the author, and you. Thanks for thinking I might enjoy reading this (which I did). Hope the book is still on the market - sounds like something I would like to read and to share with a good friend of mine! Judy