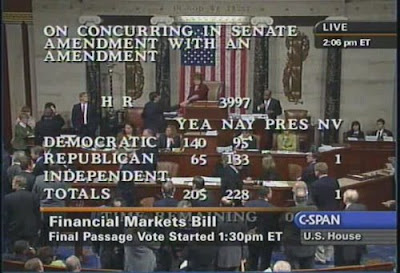 The bailout bill has failed in the House. I'm not surprised and I'm not sad about it.

One thing that irks me, though, is Republicans who now act like they actually care about middle-class Americans just because an election is coming up. Their "We need unfettered free markets" and "We won't tax and spend but we sure will borrow and spend" mentality has a great deal to do with the credit mess we're in. Have Democrats been lilly-white on on this matter through the years? No. But the GOP has led the way when it comes to spending money that we don't have during the time they controlled Congress and the time they've held the White House.

The reason for their about-face is clear - they don't want to lose their seats in November. With their formerly beloved W now turned into a hated lame-duck political non-entity, they're finally doing what they should have done with other Bush requests for money we don't have - just say no!

I'm glad enough electorally-scared Democrats joined them to defeat this, but no one who opposed this on either aisle should be gloating this afternoon. There are still massive problems to deal with, and Congress needs to be part of the response. They'll need to address the concerns of average Americans first, though.