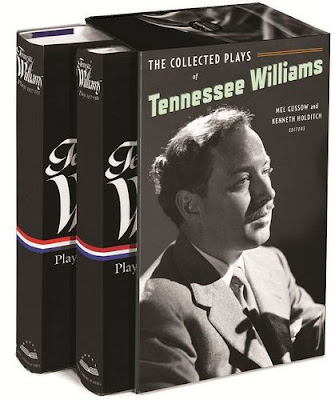 Tennessee Williams was born 100 years ago today. That seems so hard to believe, just as it's hard to fathom that he's been dead for 28 years. I'm reminded of a passage from Tom's closing monologue in The Glass Menagerie, "...for time is the longest distance between two places...".

Why? Maybe it's because the mix of soulful lyricism, scathing satire and raw violence found in more than a few of his plays is an American cocktail that continues to intoxicate us. His plays are seemingly performed here, there and everywhere on a regular basis, so while he may have left us his creations certainly have not.

I won't be seeing a Tennessee Williams play today. I'm also too far away from the Big Easy to attend this week's 25th Annual Tennessee Williams/New Orleans Literary Festival. To mark the occasion I'm going to continue perusing a remarkable boxed set from The Library of America that recently arrived at my door. The non-profit publisher issued The Collected Plays of Tennessee Williams on March 14.

The two volumes were originally published in 2000. An elegant shot of the playwright (as shown in photo above provided by the publisher) with cigarette holder in hand adorns one side and the closed end of the black box that holds those two books; a picture from the original 1947 stage production of A Streetcar Named Desire is on the other side.

Inside that box you'll find 32 of Williams' plays grouped from 1937-1955 in the first volume and 1957-1980 in the second. The late author and New York Times drama critic Mel Gussow edited these editions along with Tennessee Williams Journal editor Kenneth Holditch. Their chronology and notes alone are worth purchasing these books if you want to delve deeper into the man Holditch has called "...the poet...of the outcast."

From Spring Storm to A Lovely Sunday for Creve Coeur you feel the exhilarating, and sometimes terrifying, rollercoaster ride that Williams and his creations took over the span of more than 40 years. If there are flaws - and arguably there are many in his later, often more experimental works - those flaws are part of a rich, achingly etched dramatic mural.

The box set has a list price of $80 but there are several sites offering discounts on the set including Amazon.com and Barnes and Noble. If you love American theater, you have to have these volumes.

Here's a rare TV interview with Tennessee Williams that begins with his thoughts on the poet Hart Crane. Like so much in his star-crossed life, Tennessee's wish to be buried at sea "near the bones" of the man he so admired wasn't honored at his death; his brother Dakin insisted that Tennessee's remains were buried next to his mother's grave at Calvary Cemetery in St. Louis:

Posted by Evans Donnell at 9:38 AM