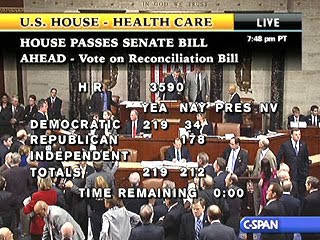 It's done. A health care reform measure is finally on its way to President Obama's desk after a 219-212 House vote. A reconciliation bill to rid the Patient Protection and Affordable Care Act of such controversial Senate add-ons as the "Cornhusker Kickback" also passed on a 220-211 vote and is scheduled for Senate consideration minus the possibility of another filibuster threat from Scott Brown and friends. Jim Cooper (D-TN 6) waited until late Sunday to publicly confirm how he'd vote, but voted yes on the reform measure and no on the reconciliation bill.

After all the shouting and tumult, I thought the following paragraph from a Salon article by Mike Madden summed up why Republicans' vehement, nasty and often childish rhetoric was and is a load of you-know-what when one looks at what actually got passed:

But the legislation that is now heading to Obama to sign into law is chock full of GOP proposals, the product of months of bipartisan negotiations in the Senate -- and beyond that, some progressive priorities were glaringly absent. There's no public option, nothing remotely approaching a single-payer healthcare system. There isn't even a mandate that employers provide insurance for their workers, only a fine charged to companies whose employees get federal subsidies to buy their own coverage. It had the backing of the drug manufacturers, the hospitals, the doctors, all the major industries involved in providing healthcare in America except the insurance companies. And even insurers will wind up making billions of dollars, as millions of Americans suddenly get access to their products.

As former Labor Secretary Robert Reich points out, what passed on Sunday comes closer to the work of previous Republican presidents than many in the GOP would care to admit:

Obama's legislation comes from an alternative idea, begun under the Eisenhower administration and developed under Nixon, of a market for health care based on private insurers and employers. Eisenhower locked in the tax break for employee health benefits; Nixon pushed prepaid, competing health plans, and urged a requirement that employers cover their employees. Obama applies Nixon's idea and takes it a step further by requiring all Americans to carry health insurance, and giving subsidies to those who need it.

So don't believe anyone who says Obama's health care legislation marks a swing of the pendulum back toward the Great Society and the New Deal. Obama's health bill is a very conservative piece of legislation, building on a Republican rather than a New Deal foundation. The New Deal foundation would have offered Medicare to all Americans or, at the very least, featured a public insurance option.

Socialism? Nope. The GOP - who were glad to pass a deficit-enlarging Medicare drug prescription measure when they controlled Congress and the White House six years ago - is just doing what it does best: play the fear card when they know their arguments don't add up (as they've done in the past) and hope it helps them in November. I suspect jobs and the slow recovery will have more of a bearing on poll results this fall, but no matter what happens in the next election, fear lost to hope on Sunday.
Posted by Evans Donnell at 2:00 AM