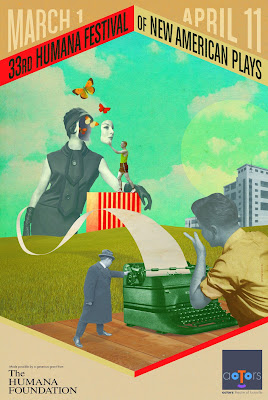 From Actors Theatre of Louisville:

LOUISVILLE, KY — The 33rd annual Humana Festival of New American Plays presented by Actors Theatre of Louisville will feature a diverse array of work from 18 playwrights. "The Humana Festival is a celebration of the diversity and strength of new American theatre," Marc Masterson, the company's Artistic Director, announced today. "The artists in this year’s festival represent a cross-section of our culture and include new voices as well as some of the most established and respected writers and directors working in the theatre today."

The Festival, slated for March 1-April 11, 2009, is acclaimed worldwide as America's preeminent showcase of professional stage premieres. "Over the past 33 years, the Humana Festival of New American Plays has introduced more than 350 plays into the world," adds Jennifer Bielstein, the theatre's Managing Director. "In this time of economic challenges, the arts provide a vital way for us to examine our changing world. The Humana Festival continues to be a place for us to unite in our support of the American theatre. We look forward to hosting our colleagues and theatre lovers in Louisville in 2009."

Descriptions of the Festival’s world premiere lineup, along with playwright biographies, are as follows:

An exploration of the earth, its citizens and the impact of each on the other. This world premiere brings the work of nationally acclaimed poet, novelist and ecological visionary Wendell Berry to the stage in a celebration of words, music and a life well lived.

Wendell Berry was born in Henry County, Kentucky. He has taught at Georgetown College, Stanford University, New York University and University of Kentucky, his alma mater. The author of over forty books of poetry, essays and fiction, Mr. Berry has received numerous fellowships and awards. He lives and works with his wife, Tanya Berry, on their farm in Port Royal, Kentucky.

At a Berkshires country house, the children of an aging literary giant gather for a party celebrating the release of their patriarch’s tell-all autobiography. When an unexpected guest appears, this family—writers or editors all—must reckon with their stories and who owns them, and with the secrets, betrayals and deep bonds that define what they’ll do for love.

Zoe Kazan is an actor/writer currently residing in Brooklyn. As an actor, she has worked in film and both on and off-Broadway. This play, her first, was workshopped at Lincoln Center Theater LAB and had readings at The Vineyard Playhouse, The Ensemble Studio Theatre and Yale University.

Under Construction
by Charles L. Mee
directed by Anne Bogart
created and performed by SITI Company

A collage of America today, inspired by Norman Rockwell and contemporary installation artist Jason Rhoades, Mee’s play juxtaposes the fifties and the present, red states and blue, where we grew up and where we live now—a piece that is, like America, permanently under construction.

Charles L. Mee has written Big Love, True Love, First Love, bobrauschenbergamerica, Summertime and Wintertime, among other plays. All of his works are available online and are made possible by the support of Richard B. Fisher and Jeanne Donovan Fisher.

When she’s cast as the “last girl” in a low-budget slasher flick, Sheena thinks it’s the big break she’s been waiting for. But news of the movie unleashes her malingering mother’s thwarted feminist rage, and Mom is prepared to do anything to stop filming…even if it kills her.

UNIVERSES puts the state of the Union under a microscope—race, poverty, politics, history and government—examining our country through the lens of Hurricane Katrina and New Orleans. Ameriville combines an innovative mix of poetry, music, movement and drama to get to the heart of this American tragedy.

Gamal Abdel Chasten, a founding member of UNIVERSES, is a songwriter/poet/screenwriter. His work has toured more than 25 U.S. cities and five countries. Writing credits include The Last Word, God Took Away His Poem and the UNIVERSES shows The Ride and Slanguage. Directing credits include The Last Word, Full Circle’s Innerviews and Articulation. Mr. Chasten is working on the screen projects Red Moon, Joe Bloe and North Borough.

William Ruiz (aka Ninja), a founding member of UNIVERSES, has been seen in Slanguage, Ti Jean Blues, Tree Tails, Salome, Latin Howel and Run Baby Run (Houston Astrodome, Texas). He was playwright/director of Waiting for Gordo (an adaptation of Samuel Beckett’s play) and Ambassador of Music for the 2008 Jazz at Lincoln Center: Rhythm Road.

Steven Sapp is a founding member of UNIVERSES. Credits include The Denver Project (Curious Theatre), One Shot in Lotus Position (The War Anthology, Curious Theatre), Blue Suite, and the UNIVERSES shows Rhythmicity (2003 Humana Festival) and Slanguage (New York Theatre Workshop). As a director he has staged The Ride (playwright/actor/director), The Architecture of Loss (assistant director to Chay Yew), Will Powers’ The Seven (University of Iowa) and Alfred Jarry's UBU:Enchained (Teatre Polski in Poland).

Three men, almost strangers, meet in a hotel room to plan an ugly crime against a powerful adversary. Inspired by research on Louisville's Rubbertown neighborhood, Wallace’s play explores the struggle between industrial greed and growth, and the health of the community.

Naomi Wallace's work has been produced in the United Kingdom, Europe and the United States. She received the Susan Smith Blackburn Prize, Kesselring Prize, Fellowship of Southern Writers Drama Award and an Obie Award. Ms. Wallace was also a recipient of the MacArthur Fellows Program Award.

From first date to marriage, birth to death, and hiring to firing, six fabulous and funny playwrights join forces with our twenty-two Acting Apprentices to explore rites of passage.

Kristoffer Diaz lives and works in Brooklyn, N.Y. His plays include Welcome to Arroyo’s, Guernica, The Trophy Thieves: A High School Love Story and The Elaborate Entrance of Chad Deity (which just won the National Latino Playwriting Award). Other awards include a Van Lier Fellowship (New Dramatists) and Donmar Warehouse Playwright Residency.

Greg Kotis wrote the book and co-wrote the lyrics for Urinetown (the Musical). New projects include The Truth About Santa (an apocalyptic Christmas tale), opening this December in New York, and the rock musical Yeast Nation: The Triumph of Life opening this coming spring at American Theater Company in Chicago.

Deborah Zoe Laufer's plays End Days, The Last Schwartz and The Gulf of Westchester premiered at Florida Stage and have received numerous productions around the country. Out of Sterno is currently receiving its world premiere at Portland Stage in Maine. Other plays include Fortune, Random Acts and Miniatures. Ms. Laufer is a Juilliard graduate.

Peter Sinn Nachtrieb is a San Francisco-based playwright whose works include boom, Hunter Gatherers and Colorado. Hunter Gatherers received both the ATCA/Steinberg New Play Award and the Will Glickman Prize (2007). In 2008, boom was produced at Ars Nova, Woolly Mammoth Theatre Company and Seattle Repertory Theatre. His newest play, T.I.C., premieres with Encore Theatre Company in 2009.

Deborah Stein's work has been seen in New York, Philadelphia, Minneapolis, Seattle, San Francisco and Edinburgh. She was twice nominated for the Barrymore Award for her collaborations with Pig Iron Theatre Company, is a two-time Jerome Fellow at The Playwrights’ Center, and is a member of New Dramatists. Ms. Stein holds an M.F.A. from Brown University and her upcoming works include Wallflower (Stages Repertory Theatre) and God Save Gertrude (The Theatre @ Boston Court).

FESTIVAL ACTIVITIES
Programming for the 2009 Humana Festival has been expanded to include more social and enrichment opportunities for patrons, industry professionals and Louisville at large in celebration of American theatre and the community. Below is a listing of all Humana Festival events. Events are open to the public unless otherwise noted. Reservations or tickets may be required, contact the Actors Theatre box office in January 2009 for more details.

New Play Getaway ticket packages (available for weekends in March and April) are offered for theatre lovers and include discounts to multiple plays with guaranteed seating, hotel discounts and a festival guide. The College Days Package (March 20-22) is an educational and professional development experience that includes a package of plays, seminars, post-show discussions and an insider's look behind the scenes. For New Play Getaway or College Days package information, call Group Sales Manager Sarah Peters at (502) 585-1210 or GroupSales@ActorsTheatre.org.

Humana Festival single ticket prices range from $24 to $55 and will be available November 25. For information or reservations call (502) 584-1205 or 1-800-4-ATL-TIX, or visit Actors Theatre's website at www.ActorsTheatre.org.

Posted by Evans Donnell at 1:50 AM